In 1953, Robert Fleming Sr. married Myra Merrick (daughter of Charles and Ruth Merrick) of Ortonville and settled in the nearby town of Drayton Plains (Waterford). A self-starter and former naval man, Robert Sr. founded Fleming Well Drilling in 1954. With the birth of sons Robert Jr. and Donald, the family business expanded and included little Flemings on the job when school was out.

Because of the warm friendly atmosphere and the feeling of “home” when visiting Ortonville, the family decided to move there. In 1977 land was purchased north of the cemetery which formerly had been part of the Staples dairy farm.

Shortly thereafter, Robert Fleming Sr. died of a heart illness. To survive Rob and Don took over the Well Drilling business. Rob had recently graduated from high school and was attending college Don was in his senior high school year, and two sisters, Janet and Holly, were also at home. Thanks to many loyal contractors and friends who were willing to put their faith in both the boy’s skills, Fleming Well Drilling is still here today. 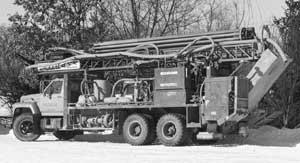 Today all but one of the Flemings reside in Ortonville. Rob with wife, Susan, and their son, Robert III live inside the Ortonville village. Don with wife, Pati, live just south of the business with daughter, Kati and number two on-the-way. Myra enjoys her many endurance horses and lives on the family farm. Sister, Holly, also enjoys horses, has one daughter, Tiffany, and lives close-by. Sister, Janet, and husband, Del, live in Tennessee with plans of joining us soon with their two teenagers, Robert and Rachel.

Being an owner and the operator of a business gives Fleming Well Drilling the edge.